As I mentioned recently, I have been running the Ghostbusters role-playing game in an ongoing Toledo Ghostbusters campaign, and I would like to squeeze in some Teenagers from Outer Space and Star Wars D6. Well, I just received my copy of Judge Dredd & The Worlds of 2000 AD (more on that later this month) and I ordered Paranoia: Red Clearance Starter Set (more on that as soon as I receive the physical portion of it). Both of these shall be played this year, especially since I'm paying for a Zoom subscription and I want to get my money's worth out of it. I'll be reporting back hopefully sooner rather than later. Be seeing you...

Posted by Gordon Cooper at 11:10 AM No comments:

In 2020, I finally got my Ghostbusters campaign (the Toledo Ghostbusters) restarted, and I look forward to running many more sessions in 2021 with even more players. With any luck, I might even get to run Teenagers from Outer Space! (And, dare I hope, Star Wars D6...)

Posted by Gordon Cooper at 9:10 PM No comments:

Thanks to Zoom and the interest of a surprisingly large number of players, I have run two sessions of Ghostbusters: A Frightfully Cheerful Roleplaying Game in the last two weeks (Saturday, November the 14th, and Saturday, November the 21st). At the moment, three members of the Toledo Ghostbusters have busted ghosts in 1980-something northwest Ohio:

Two other members (played by Zippy and Joe) will be joining upcoming sessions.

I won't do a session report, but I will share a few facts:

Ghostbusters is a moderately prop-dependent role-playing game, so how well does it adapt to Zoom, my virtual role-playing medium of choice? Surprisingly well. The Ghost Die, of course, can be replaced with any ordinary six-sided die of a different color or size than the rest of the dice. I trust my players to roll their own actual dice, so no dice-rolling app is necessary. Equipment cards are great for in-person games, but players can discuss with the group what they want to carry and just record it on their character sheets. Character sheets fit on an index card and characters can be generated in as little as five minutes. Name, four Traits (Brains, Muscles, Moves, and Cool), four Talents, and a Personal Goal are all you really need to start playing.

Zoom has opened some great gaming opportunities to me, and I'm glad to be running Ghostbusters (and other games) again. Who knows? Maybe I'll be able to introduce players to some of my other favorite role-playing games...

Posted by Gordon Cooper at 1:32 PM No comments:

I am predisposed to look favorably upon d6-centric games that use dice pools, but I have a strong preference for those that limit themselves to "whole dice," by which I mean, for instance, modifiers of +1D (+1d6) rather than +1. The Ghostbusters role-playing game is a perfect example of this. All of the Traits and Talents are whole dice. The D6 System games that followed would promptly change this by introducing fractional dice in Star Wars: The Roleplaying Game, and this would become the norm for the RPGs of West End Games. Most fans of the system probably don't care one way or another, but rules mechanics resolved with whole dice appeal to my sense of RPG aesthetics. It's clean. It's simple. It feels natural. If I can comfortably convert any D6 RPG to whole dice, I will gladly do so, and I will be much likelier to play or run such a game.

Occasionally, I wonder if Tunnels & Trolls could similarly be improved. It might be too radical an undertaking to convert the attributes, but perhaps the combat Adds could be transformed to whole dice. It's just a thought for now, but one I might revisit in the future.

If whole dice were to become a game design trend of epic proportions, I would welcome it wholeheartedly.

Posted by Gordon Cooper at 8:33 PM No comments:

This is just a friendly reminder to fans of Risus: The Anything RPG and fellow members of the I.O.R. that Risusiverse is a pleasant, interesting, and informative resource for your Risus role-playing needs.* Take a peek!

Posted by Gordon Cooper at 9:44 PM No comments:

If I Were a Dice Artisan

This is just an idle thought scarcely worth mentioning, but since I'm close to my monthly deadline, I'll mention it. I wish I had the means to make my own specialty dice. If I did have the means, I would make 12 mm binary dice, hit location dice (to my own specifications for both d6 and d12), Ghost Dice that have five blank sides and a Ghost, and Wild Dice that have four blank sides and two special icon sides. 'Tis a pipe dream, but at least I've beaten my self-imposed deadline.
Posted by Gordon Cooper at 9:35 PM No comments:

Sometimes you, as a Ghostmaster (and I'm assuming you're a Ghostmaster, but if you're not, let's just pretend), need to create a non-character player on the spot to interact with your players' characters. Perhaps you mentioned a bystander in passing or the player characters suddenly want to consult someone, and you had not considered generating the statistics for every living person on the planet. You fool!


Well, fear not. With one handy little table and three six-sided dice, you can easily generate the Traits of any non-player character in mere seconds. In fact, with slight modification this table could also be used by players who prefer the random generation of Traits to the standard point allocation method, so a second table is provided for starting player characters.


N.B. These tables are for use with the first edition Ghostbusters role-playing game. The author assumes no responsibility for their use in any other game, dimension, or plane of existence.

Posted by Gordon Cooper at 10:51 PM No comments:

Dice notation is widespread in the role-playing game hobby. It's a succinct way of expressing a concept that could easily become tedious indeed. For those unacquainted with it, standard dice notation means that instead of stating something like "Roll three six-sided dice and add the resulting numbers," one would render it as "Roll 3d6." The first digit is the number of dice rolled; the second digit is the type of die based on the highest number it generates. (Note I did not say it is the type of die based on its number of sides, as they are not always equal, such as the d3 that has six sides numbered 1 through 3 twice.)

There are many kinds of binary randomizers. At its most basic, a coin is a binary randomizer (tails = 0; heads = 1). Any even-sided die can be used as a binary die (odds = 0; evens = 1). One can even purchase (or make) six-sided binary dice that have an equal number of sides marked 0 or 1.

At one time, I thought of just using "R" (for "randomizer"). Roll 4R. That sounds awkward on the tongue, and "randomizer" is too generic to be meaningful. All dice are randomizers, after all. So, that's out.

I dabbled with "d1/0." Roll 4d1/0. But that's too long, and the slash can be confused with the symbol for division. No good.

For a time, I considered just "d1" or "D1" (the capital D having been popularized by that other system that only used one type of die, The D6 System). As I mentioned at the beginning, die types are denoted by the highest number they generate, and for the binary die, that would be 1. The problem I foresee with D1 is having to explain it endlessly. I'm already exhausted contemplating it. That being said: Roll 4D1. It sounds too similar to "Roll forty-one." I don't like that.

Today, it occurred to me that I could use "C" as the notation. "C" is for "coin," the most basic randomizer, binary or otherwise. Roll 4C. This could mean roll four binary dice or toss/flip/throw four coins. (One doesn't ordinarily "roll" coins for this purpose.) I don't hate this idea, and it's almost reassuringly similiar to "Roll 4D" from the various D6 games. Still, "Roll four coins" is counterintuitive, and that annoys me. I could dispense with the verb "roll," but I hesitate to replace it with "throw." Throw 4C. Hm...

Perhaps the most elegant method I've seen is found in Risus: The Anything RPG. The dice notation for this D6-centric game is merely a number surrounded by parentheses. Roll (4). I like that. "Roll four" in binary terms can literally mean "Roll four binary randomizers of your choice." If I wanted to universalize the randomizing activity so it applies equally to dice and coins, I suppose I could use the word "shake." Shake (4). It's by no means standard in role-playing (although it is in Yahtzee), but maybe that's appealing. Hm...

Well, I'm still undecided, but writing this has provided more food for thought, and that inspires me, which is a good thing. So, adieu until next time.

Posted by Gordon Cooper at 11:40 PM No comments:

Star Wars D6 and Me

I suppose I ought to have posted this earlier this month (May the 4th?), or perhaps last year when I bought it (I think), but here is a nearly somewhat adequate photo of me holding the first Star Wars role-playing game I have ever purchased, the 30th Anniversary reissue of the first edition of the original Star Wars: The Roleplaying Game, on the day I bought it. 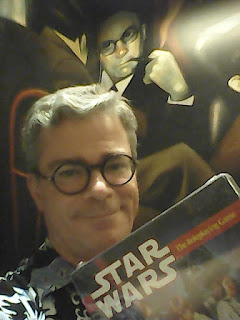 First published by West End Games, this reissue by Fantasy Flight Games includes the first two volumes in a slipcase, and is considered by many to be the greatest RPG adaptation of Star Wars. (There are those who consider Risus to be the greatest medium for Star Wars role-playing, albeit in an unofficial capacity, but I have not yet had the pleasure to test this equally plausible claim.) This is not a review, since I'm still awaiting the chance to play it, but I will say that I like what I've read.

Posted by Gordon Cooper at 10:58 PM No comments:

S. John Ross writes in Tabletop Indigo that a new fantasy adventure for Risus: The Anything RPG called Slimes of Blossom Grove is now available via DriveThruRPG, and it's free.

Posted by Gordon Cooper at 9:47 AM No comments: